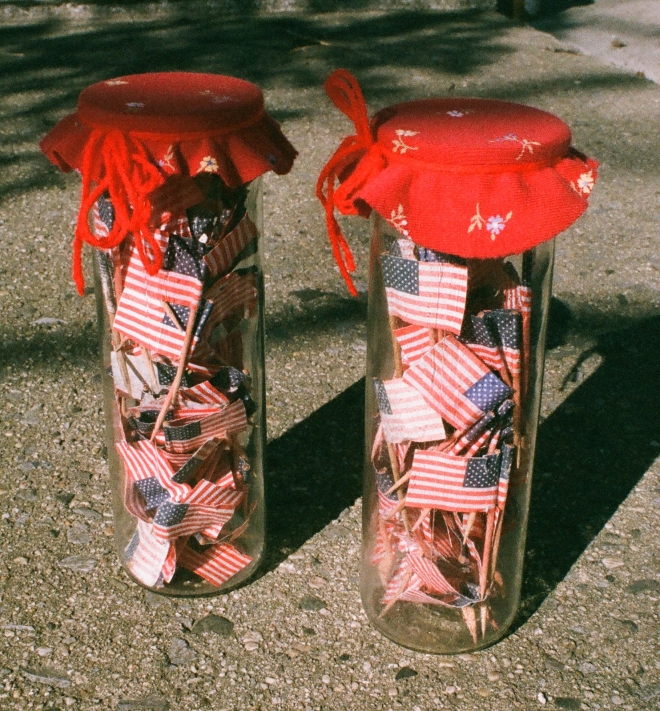 Next-door to our waterfront home was a very popular restaurant called Johnny’s Reef that hosted large crowds of noisy people. The huge parking lot was often full of boisterously drunken patrons who carried their cocktails-in-a-plastic-cup to their cars, to the bus stop, or beyond.

The restaurant’s practice was to poke a toothpick mounted with a little paper American flag into the maraschino cherries floating in the drinks. The drinkers inevitably tossed their little flags on the ground. This littering, combined with the outrageously loud music, yelling, and fighting of the patrons, were the inspiration for the local neighborhood folks to refer to them, disparagingly, as “the Reef People.”

We were constantly cleaning up the litter they left on our own little street, and came up with the idea of saving the little flags-on-toothpicks, just to see how many we could collect; we found them lying in the street as far as a mile up the avenue from the restaurant. This project lasted for the months that we remained in the house.

We were intrigued by the irony of the “patriotism” of the restaurant in decorating its cocktails and the poor citizenship of the littering drinkers, and came up with the idea of putting our collection of flags into a couple of glass votive-candle holders that the same people threw onto our beach, as a collection of “acts of patriotism.”

Part of our sculpture “Conflict Series”

Slate roof shingles scrounged from a photo shoot done in an earlier lifetime were slotted into four dockwood 2 x 4s to create a bookshelf for our ever-burgeoning library.

When we came to New York in 1976, and being poor starving-artist types decided to make our own furniture to whatever extent we could, we were gratified to learn that on the Upper West Side of Manhattan there were actually several sources for lumber, paint, tools, etc. Our favorite was AJO Lumber on Amsterdam Avenue at 100th Street.

The very first piece we created was the simple bench made from two six-foot lengths of 2 x 12” pine, pieced together and placed on sections of 12 x 12” beams (see our blog post “The Beginnings – 1976” from February 18, 2014). We lugged the wood and a quart of polyurethane from AJO to our apartment on Riverside Drive, and put it together in a few days, including drying time between four coats of polyurethane. Later projects included our super-heavy-weight dining room table (still in use!), and four bookshelves, the lumber for all of which was carried home with the help of our 12-year-old son.

It was with the utmost pleasure and surprise that we found lying on our beach – in 2014, almost 40 years later! – a branded yardstick from none other than our favorite old-time lumber store. Cleaned up and polyurethaned, it adds a historical touch to our studio space.

We take the liberty to quote here at length the great German author Albert Vigoleis Thelen, on decay.

“. . . I wended my way to the Calle Morey, past the Cathedral with its coloration of burnt earth, the earth of Mallorca. I quickly located the . . . house, a mummified palace from the Moreto epoch, modified in later times and resulting, through a patina of decay, in a combined style that was not without a certain unified effect. In Spain, this crumbling and erosion of masonry under the influence of sooty time begins at the moment when the architect hands over the key to the owner, just as a living organism taking its first breath starts breathing its very last. In Portugal, such fatally creative decay – creativity, as always, considered as a form of decline – begins with the laying of the cornerstone – a fact that could lead us to even more telling analogies in the human sphere. As I grow older, again and again I see more and more clearly that the preservation of human creations is an exercise in intellectual impoverishment, a tragic admission of impotence and impossibility, a futile attempt at rescue. To avoid sinking, all we need is a slab of wood . . . As for myself, I love to watch things collapse. In the noise, the showers of ashes, and the clouds of swirling dust I can suddenly discern a gesture, witness the emergence of a word and a deed that captivate me. In such events I detect a tone that, in my enraptured state, can lead me toward the ineffable more readily than the sight of anything that is firmly grounded, supported on all sides, anchored, held fast with mortar and pitch. In the realm of language, poems by Trakl can have this effect on me. In the absence of words, gestures, or sounds, I can still sense the fantastic metamorphoses that take place amidst all the rubble.”

From The Island of Second Sight by Albert Vigoleis Thelen 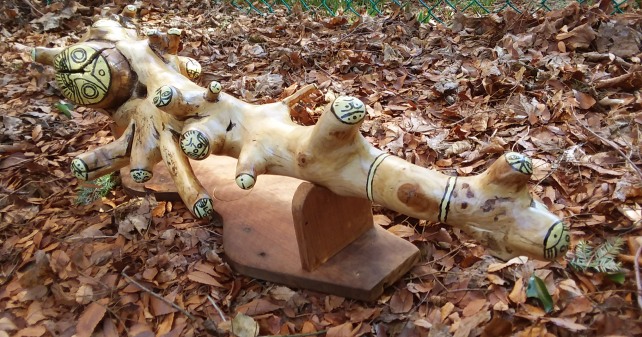 We found a stump of a cypress tree washed up on our beach one morning. Its close-set branches had been cut off. The longer we looked at it, the more it appeared like a club, bristling with lethal knobs (see photo below). It laid around our garden for a few years, with the bark gradually sloughing off, and an idea germinated. It was so heavy that one couldn’t pick it up by its narrow end and wield it like a war club, but perhaps a mythical giant warrior could’ve done so. Each of the cut-off branches might have been decorated with the faces of the enemies he’d slaughtered with it.

Research resulted in a collection of images of early-medieval warriors from Norse carvings, ancient Roman coins, and tapestries. We rounded off the cut ends of the branches and used oil paint to decorate them with the faces. The whole was then polyurethaned to bring out the delicate color and texture of the wood.

Sculpture by Dave and Sharynne Wilder – cypress stump, oil paint, and polyurethane; mahogany and teak base.

Part of our sculpture “Conflict Series.”

One of the many pieces of flotsam from the classic motor yacht we dubbed “The Mae West” to wash up on our beach was a narrow teak cabinet door, with a solid teak frame and teak plywood inset. We decided to use it as the top of a side table, making the legs from a solid teak 4 x 6” slab that had been purchased for a boat project and never used, and a lower shelf from another 1 x 6” teak board, from the same yacht. To fill the inset we cut a strip from the nautical chart of one of our favorite cruising areas: the North Fork of Long Island, New York, and Shelter Island. This is covered by a sheet of plate glass.

Neighboring our former waterfront home is a restaurant parking lot, the source of excessive amounts of noise from its denizens, including very loud music, yelling and screaming, and fighting. It’s The Bronx. Screening us from the lot, and muting much of the noise, was a thick stand of Leyland cypresses, a tree known for is sound-absorbent quality. But Hurricane Sandy uprooted and killed almost all of these beautiful trees, exposing us to not only the noise, but the staring eyes of the restaurant-goers.

We decided to create a privacy screen utilizing the bamboo thicket that had invaded our landlady’s yard across the street. We wanted a whimsically sculptural look, and achieved it by roping together the bamboo stalks into a “fence,” supported by existing trees and heavy limbs of our mulberry tree (also a victim of Sandy) planted in the earth.

Thus we created our “Bamboo Curtain,” named in reference to the existential barrier of the Chinese during the Cold War. To enhance the symbolism, we made the heads of the mulberry posts into painted images of Ban Po “guardians,” based on the earliest-known art found in China, from the Neolithic Period.

When we moved to our new digs we knew that the piece was going to be removed, so we cut off three of the guardians’ heads and mounted them on a cross-cut slab from a huge dock piling to create another sculpture, “Ban Po Guardians (The Bamboo Curtain, Detail).” 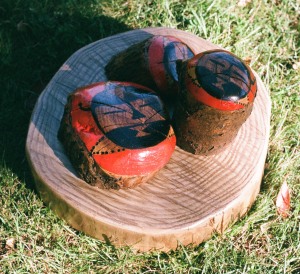 Part of our sculpture “Conflict Series”

Way back in December of 2013, we posted a photograph of a small pile of dockwood in its original state that we planned to turn into our third Dockwood bench (see below).

We fabricated the bench in 2014, and after finally photographing it last year, we’re getting around to posting it here. It’s a two-person, “love-seat” kind of bench, its width determined by the length of the key piece of lumber that was perfect for a backrest.